Flutter vs. React Native – What to Choose for Next App Development? 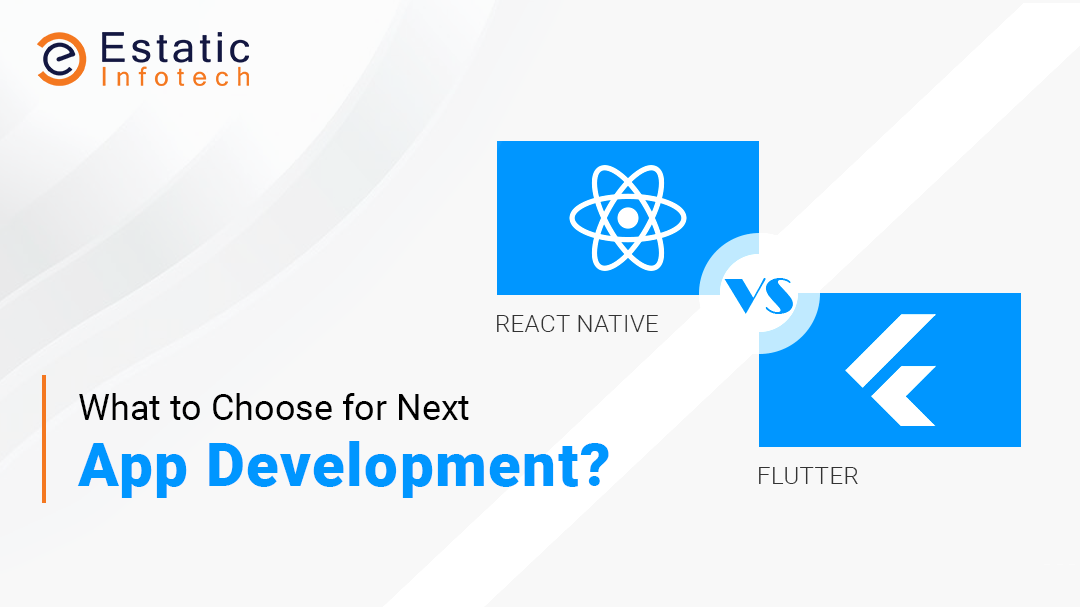 In the highly globalized world, we all use mobile applications for our day-to-day tasks. Organizations go for service and product app development that presents the preferences of the largest target audience.

Organizations are now digging deep to know the worth platform for their app development. Some businesses prefer iOS, powered by technology and seamless experience; others prefer Android for more functionalities and software based on their usage. Both technologies are in demand and ranking high on GitHub with Flutter 71,900 stars and React Native 79,600 stars.

To develop the application that serves the platform well comes with cross-platform software development. It allows the development of apps that run on any platform and gives a functional UX for all users.

This article will help you choose the best framework from Flutter vs React Native.

It was introduced in 2018 as a cross-platform user interface system. The Google community well designs flutter to boost the growth and development of engaging native apps. Flutter is an open-source, free-to-use framework that uses an object-oriented programming language known as Dart.

It is viewed as one of the top open-source frameworks with a complete development ecosystem, and developers love to work with Flutter.

Apps built with Flutter are:

React Native is a popular framework with open-source, easy, and simple features to use. It is also known as a JavaScript framework that Facebook built for cross-platform mobile development – Android and iOS apps. Following Stack Overflow Developer Survey 2021, Flutter is on the 6th rank with 14.51%. React Native is on 5th rank with 16.48% for web and mobile app development with Developers and Professionals votes.

React Native lets developers use its power by connecting it with each platform's different features, and seamlessly merging desired features. In addition, it helps developers to write app code in JavaScript, Swift, and Objective-C.

Apps developed with React Native are:

The unique Flutter feature is the way it utilizes the out-of-the-box application. Yes, you heard it right. It ensures a constant development and design model every time. In addition, Flutter gives a rich Google-based widget that attracts users while using the application.

Flutter is known for its hot reloading feature. The platform allows the developer to view the applied changes in real-time without losing their state. So, with Flutter, you can save development time and improve productivity and efficiency.

Flutter seamlessly integrates with Objective C or Swift for iOS app development and Java for Android app development. Likewise, it suggests that there is no need to rewrite the code once it is done for any platform.

Flutter will help you share the written codes easily between different platforms, which makes it an ideal choice for MVP development.

React Native goes a step ahead to create a native API code free of interference by interacting with native Android and iOS elements. Threads used here that are different from native APIs and UIs help enhance apps performance.

Ecosystem in React Native help to robust ecosystem and UI libraries to automatically render the app’s appearance at every change.

React native delivers a modular design and architecture that allows developers to update apps immediately. And it has a straightforward interface that is not complex compared to other frameworks and uses a software interface to destroy unnecessary elements.

When you plan to develop a mobile app and think about investing in app development, it is important to evaluate the options. Choosing an implementation path that matches your needs plays a crucial role in your business app.

It directly controls the factors apparent to almost any business and would present a way to develop a successful application.

Flutter helps to smooth the performance of a traditional neutral style for all devices. It assists in keeping the project scope safe. In Flutter, mobile apps seem similar to the device and operating system versions. Also, with Flutter, the navigation and other parts stay unchanged unless they are intentionally upgraded.

React Native gains native visual elements and appearance that offer a personalized and seamless experience. Besides, the application elements are updated separately while updating the operating system. It helps them to maintain the likeness and usability with other native applications.

Flutter and React Native both are open-source and straightforward frameworks for app development. A known mobile app development company will help you promote hot Reloading and other features. It improves production efficiency by the development time and implementation of your apps.

When it comes to Flutter, it does not require any connectivity to interact between native modules. It has native elements by default, but Reacts Native needs a bridge use and links with other factors to improve performance.

Flutter gathers to the native x86 and ARM libraries without any additional layers. So, if you are choosing Flutter, it lets you use fewer resources and time to execute code. Additionally, Flutter has a C ++ graphics rendering engine, which is extremely good for cross-platform app design and seamlessly running animations.

Source code execution in React Native needs a connection for the gap between JavaScript code and the device's native ecosystem. It helps for easy transmission and data transfer.

Compared to Flutter, when it comes to Web App Performance, React Native is believed as the ideal choice. In React, JavaScript is the main front-end technology with C++ and HTML for developing an excellent web application.

Therefore, react Native is the right choice if you want to develop a performance-based web application.

The two tech companies make both frameworks with unauthorized licenses. So, Flutter is simple and accessible compared to others with resistance to changes created by OS updates. React Native depends laboriously on native elements for further adaptation efforts in operating system updates.

Flutter is more compatible as it supports several Android and iOS devices recommendations. Here, developers may need native development for React Native and Flutter, both for some exciting functionality.

As Google created a flutter, it offered a range of plugins. And these plugins provide tracking features like Geolocation, giving a positive experience. React Native positions well with one-off tracking, where some challenges can still arise with constant monitoring.

Flutter comes with a community that supports developers while developing an app. It also helps for app success in open-source development as the community grows faster. React Native, on the other hand, gives access to developers whose community is huge and still growing in popularity.

So, developers get information quickly on React Native's community compared to Flutter.

Flutter vs. React Native: which one to choose?

After exploring multiple characteristics and frameworks' parameters, Flutter vs. React Native still doesn’t have a clear winner. It depends on what type of app you require for your business. Because every app development is different, selecting the correct framework depends entirely on your project requirements. Leading Mobile App Development in India will help you assist in choosing the right framework and technology stack for your next app development.

For larger applications with native programming, Flutter is the most suitable option in broad terms.

On the other hand, React Native adapts well to applications developed from plug-and-play modules.

Both Flutter and React Native frameworks are unique, and both have their advantages for successful and performance-driven cross-platform applications. Get faster and easier app development in your budget with our expertise.