Kotlin vs. Java – Which One Is Better for App Development? 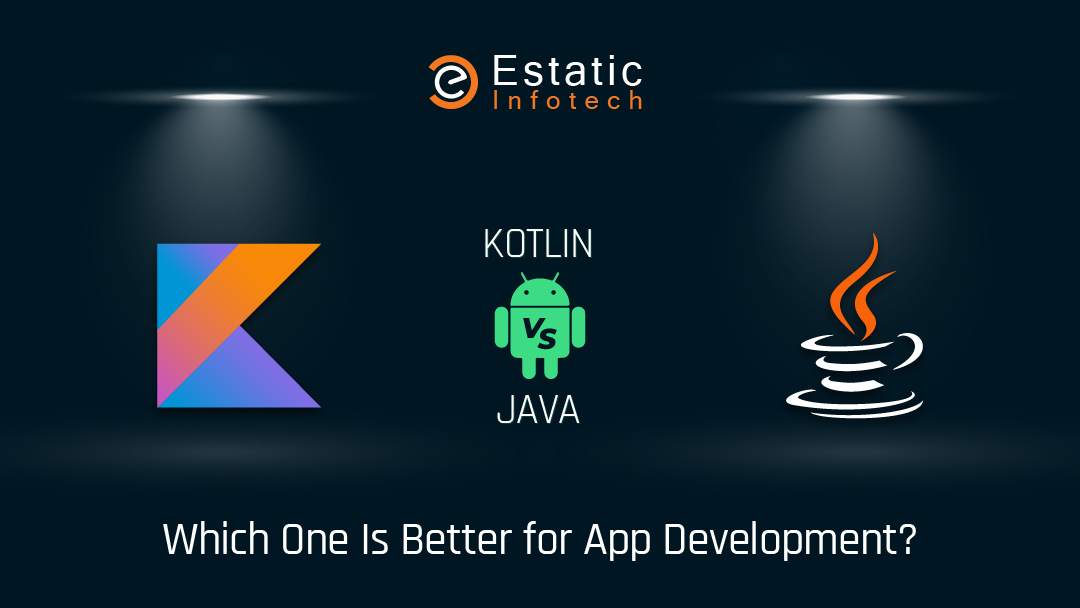 Android app development has become the most popular smartphone operating system worldwide. Android is growing, and with this new wave of android applications in demand, enterprise mobile app development company is offering the best mobile app solutions using advanced technology. Some programming languages like Kotlin are used to develop an impactful mobile application.

It is essential to find the right programming language to develop your business app. Kotlin and Java are the popular frameworks among the best app development languages.

Let's see Kotlin vs Java and peek at the pros of both languages. This article will help you decide which framework is better for specific Android application development projects.

Kotlin is a statically typed and general-purpose programming language designed by JetBrains, who built the best IDEs like IntelliJ IDEA, PhpStorm, Appcode, and more. Kotlin was introduced in 2011 when Android development required a modern language to add to the qualities of Java for advanced mobile app development.

A statically typed language based on Java Virtual Machine (JVM) enables programmers to update old Java apps to Kotlin. The benefit with Kotlin is that you can assemble it to JavaScript and interoperate it with Java easily.

Kotlin is quicker to write and takes less code to develop an app and thus it's favorite of developers. This also means there are many fewer errors and bugs. Hire kotlin developers to leverage the capability for custom mobile app development.

Java is a computing platform and one of the most popular programming languages released by Sun Microsystems in 1995. It has grown from modest starts to power a large share of the digital world, developing mobile applications on reliable platforms. With Java, organizations can have new, innovative, and digital services designed for the future.

The latest Java patches include meaningful development that enhances the Java app's stability, performance, and security. Installing the latest Java updates confirms that enterprise mobile app development company offering Java applications will continue to run with the most up-to-date version.

Java is known for its secure, fast, and reliable language, so it is widely used in laptops, data centers, game consoles, mobile devices, and more.

If you plan to develop a Java application, then benefit yourself with excellent Java development services from the best enterprise mobile app development company.

Kotlin vs Java: Comparison Between Both Android App Development Languages

Static members in Java are used primarily for memory management, where developers can apply Java static keywords with methods, variables, nested classes, and blocks. Unlike Java, in Kotlin, the companion object assembles static members of the class. In addition, an object declaration can be written with the companion keyword inside the class.

Talking about Java, it is a mature language with outstanding performance. Whereas Kotlin performs more reasonably than Java for Android development due to its capability and properties, it is 100% interoperable with Java.

Using Kotlin, you will get type interfaces, nullability support, and universal guards. There are many reference types relevant to the class’s basic concept with Java.

Kotlin is a newer language than Java, but it has grown fast and become one of the most popular choices for Android app development. Google backs it, and thus, it can gain more support and advancement as time goes on. But Java is more popular than Kotlin in the current situation.

Kotlin language is capable of cross-compile multiple run-on platforms, while its use of bytecode limits java. With Java, you can only be compiled for a single platform at once.

Kotlin supports JavaScript and bytecode along with native code compilation. On the other hand, Java language assembles bytecode for JVM and JS using Rhino and Nashorn JS Engines.

When it comes to Java, it has a vast collection of frameworks and tools for Android app development. Kotlin is starting to hook up with the opening of newer libraries such as KTX and Coroutines.

Unlike Kotlin, Java is not very scalable, and thus, the mobile application can sometimes get bloated, which can affect app performance.

Kotlin comes with stronger scalability and emphasis on its design, which improves the performance of an app by reducing bloat.

Some of the top apps built using Kotlin language are:

Some of the top apps built using Java language are:

Kotlin is a relatively new language in the market. So, the community of Kotlin is small compared to Java. So, there are more professional developers and a community of Java with experience to consult exclusive android applications.

Kotlin works best for specific applications and has led to many businesses' preferred choices in recent years.

Java vs Kotlin: Which is Better for Android App Development?

Both languages are fantastic and offer a range of benefits that would make them excellent choices to use in developing leading mobile applications.

Both languages are excellent and have their benefits. Hire kotlin developers for scalable and feature-driven app development.

And if you are looking for an open-source project with more flexibility for third-party libraries, Java is the right option for business app development.

To use Java and Kotlin programming language efficiently, get in touch with the best enterprise mobile app development company.