What and Why Flutter? Most Common Myths 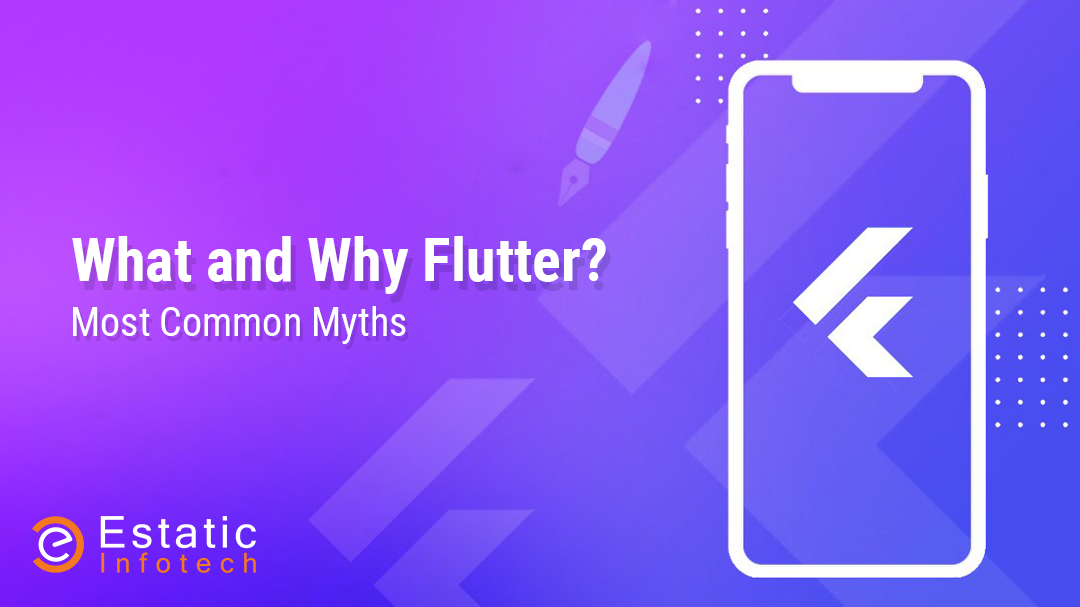 A new cross-platform framework, Flutter, is all over the market, and developers use Flutter for diverse mobile app development. It will help mobile application developers to create outstanding applications in less time, with a 60fps rendering, and can export its apps to iOS, Android, Windows, and shortly to HTML.

Now, every developer has some myths about Flutter, and they say, "I don't want to develop on Flutter because Flutter doesn't have certain things as compared to Android and Kotlin.

Let's see some myths and facts about Flutter. After reading this article, you will know all the myths, how popular Flutter is, and the benefits of Flutter for developing scalable and robust applications.

What and Why Flutter?

Flutter, unlike other frameworks, lets developers create native apps using a single codebase. With Flutter, you can develop applications for both android and apple using a single codebase and programming language. Its SDK is a collection of tools that help developers transform and compile codes into native machine code. In addition, Flutter contains a UI library of reusable elements, including sliders, buttons, and other features.

Developing applications with Flutter saves developers a lot of time with added personalization features. It also includes two parts as a programming language, an SDK and a framework.

Flutter works on a programming language called Dart, which is highly used for app development. Based on front-end development to create web and mobile applications, Flutter is the first choice of any business. For customizable applications, Flutter is the best programming language that assists you in developing an outstanding app with an attractive design using Flutter Skia.

Users will notice if the app is Native or created with Flutter.

The app created with Flutter utilized only two libraries: HTTP and json_annotations.

Besides, Flutter offers multiple use cases where developers don't require a library to blur a widget or display an image from a URL. Coroutines are available by default when you choose Flutter for mobile app development.

Dart is an odd language.

Based on the research by Stack Overflow, it confirms that in 2019, Dart was the favored programming language and has the second position in the “Most Loved” ranking, just after JavaScript.

Dart is not the traditional method as the myth says. It is the most popular programming language, and any developer can easily learn Dart programming language. It was developed by Google in 2011 to facilitate the front-end development of interfaces of both mobile and web apps.

Dart functions as a type-less philosophy, so it provides developers with the flexibility and efficiency to create more applications by working less. Due to Dart's flexibility, many developers have already shifted to dart from other programming languages.

Being an open-source programming language, Developers are shifting to Flutter and developing interesting and successful applications. Thus, developers go for a hassle-free process without any licensing issues and penalty strikes with Flutter.

Work on an MVVM model using LiveData in Flutter.

LiveDatas is an architecture component that is an observable data holder. It observes LiveData objects for any changes and is fun to use on Android. If you are looking to develop an android app, it is easy with LiveData and ViewModel. Hire flutter app developers to build customized Flutter applications incorporating all business features.

The MVVM stands for Model, View, and ModelView.

Model- It has application data.

View: It observes and reports the ModelView of the user’s action. The View is also empty of any application knowledge.

ModelView: The ModelView is a central point of Model and View that connects the Model to the View from transferring data from the Model to providing data streams to the View.

Thus, when developing applications in Android, Flutter app developers can create a dedicated SearchViewModel to see the current View via LiveData

Though we do not have any LiveDatas with Flutter, we have Streams to use for app development. Streams are relatively equal to LiveData and can be accessed via StreamBuilder for developing various features. Further, the StreamBuilder updates the view hierarchy anytime a new value pops up because the widget is connected with the steam.

GSON and Moshi does not work on Flutter.

JSON, Java Script Object Orientation, is operated to store or transport data from the server to the web page. JSON lives as a string that requires transformation into a native JavaScript object to use it. Many popular libraries, including Serialisation, FastJSON, Moshi, Klaxon, Gson, or Jackson, deserialize JSON to POJO (Plain Old Java Object).

Or, weFlutter app developers had to first use JSON as a HashMap and then add loops to recover API components.

To deserialize the JSON tool, Flutter does not authorize access to any of these libraries but has a built-in tool. Hire flutter developers who can offer all elements of the Flutter app and select the class and mark it with @JsonSerializable by using a built-in tool for JSON deserialization.

Some flutter developers change the name and call it a default constructor, factory, and integrating .toJson().

Crashlytics is not available on Flutter.

Flutter app development company uses Crashlytics to handle crashes on a production app, but it works automatically only on Java. Flutter does not compile to Java.

Fortunately, there’s an execution of this SDK that uploads Dart’s Exceptions to Crashlytics: flutter_crashlytics :

Developer can wrap the application with this code to manage and send the crash to Crashlytics :

// In production mode report to the application zone to report to

// Whenever an error occurs, call the `reportCrash` function. This will send

// Dart errors to our dev console or Crashlytics depending on the environment.

Flutter’s widget has a different method to handle their sizes. While developing, some views such as Center or ListView try to be huge, while Text and Image have a specific size.

When you hire flutter developer, each widget has its utility for app development. Developers can make it clickable, wrap it with a GestureDetector, and add padding: surround your widget with a Padding. The pattern of adding padding and other elements is more compelling when you add specific behaviour to an existing widget.

Here is the detailed information on the Flutter documentation.

SDKs in Flutter are limited.

Undoubtedly, all SDKs might not be available on Flutter. But the Flutter app development company will help build your existing android SDKs using Flutter Channels.

For developing an application, you can begin by calling an async method from Flutter. It will open a MethodChannel on Android that works as an ObservableEmitter.

Further, it has to pass your method name and match it with your SDKs and then it will publish the results on the Flutter Channel.

There are no Coroutines on Flutter.

Here, we will discuss how to manage movie list download. Hire flutter developers who can make an OmdbRepository consist of searching and downloading movies following their names.

For the Android application, you can use Retrofit with a plugin to handle the request with a coroutine, then fire the HTTP call in a suspend method. The coroutine will be suspended using the .await() method.

With a flutter, we can fire an HTTP call using http.get(url) method then decode the body part utilizing the plugin json_decoder. This technique is now annotated with async and returns a Future&lt;List&lt;Movie&gt;&gt;.

The asynchronous method to recover the HTTP response is prefixed by await, that is equal to the previous Kotlin code.

Many developers still believe these popular Flutter myths, but once they start using Flutter, nothing is impossible with Flutter. Many big companies are now using Flutter and creating mobile and web apps for scalable and customized app development.

Businesses are saving a lot of time and money using a Flutter programming language. Flutter's open-source community is gradually reaching new heights with new features to make it the top open-source framework. These applications can be sent on any platform, including a desktop.