Why Ivy Engine is a Center of attraction? 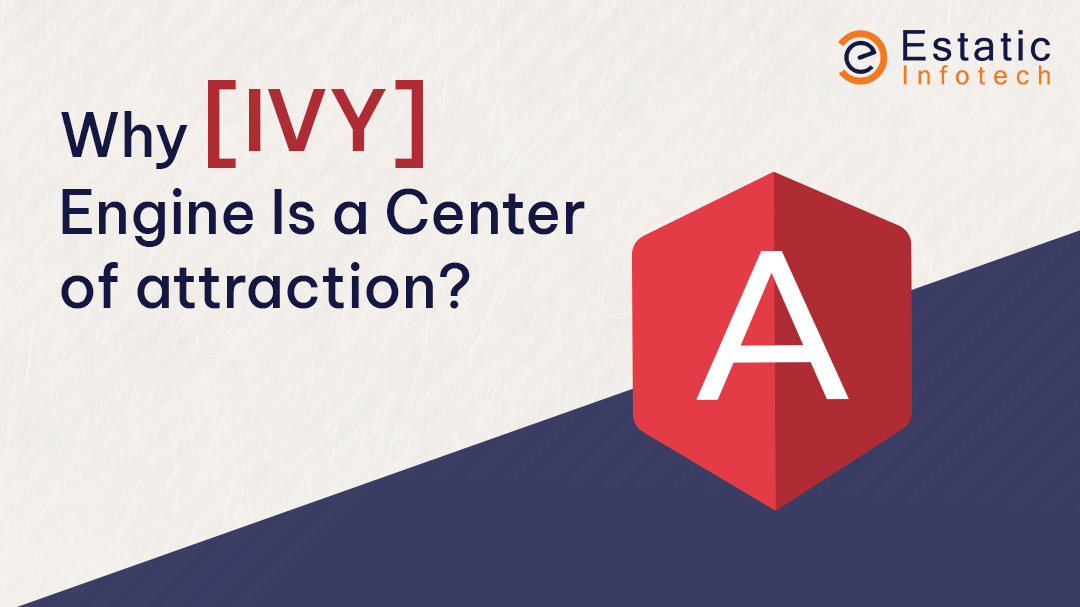 Angular is the most popular open-source app framework that developers widely use across the globe. Mobile App Development Company along with the community of developers using Angular is still waiting for all the regular updates that Angular comes up with.

As per the research, developers in large numbers have used Angular in recent times. When Google released Angular in 2016, many developers relocated to this robust framework and started their career with Angular. The fast-growing Angular community glances to the Angular team for regular updates.

With that, we have Angular 8.0 upcoming as an upgrade version- Ivy. Ivy has been near and was rumored in a preview version since Angular 8, but one must use the new engine manually.

The Angular is known for its performance, and its runtime is quite good. Some drawbacks include the loading time being longer because of the large file size, which affects the application's overall performance. Here comes the role of IVY to solve the challenges.

Ivy is the channel of rendering and compilation of the next era. Yes, Angular Ivy is a very refined and latest version that comes with advanced features.

It is a full rewrite of Angular's rendering engine that helps to speed up the app for the large file size. It is called a fourth rewrite of the Angular engine and the third since Angular 2. Unlike rewrites two and three, Ivy pledges marked modifications to your application which was not noticed earlier.

Using Angular Ivy, developers can assemble components more independently of each other, and it helps enhance the development times. As recompiling an application will only involve creating the changed components, Ivy is used to improving.

It also has a strong focus on tree-shaking as the speed delivered by it is excellent. The file loading is faster than before, and it works well with all functions, even in slow networks. In addition to that, Ivy is very simple and easy to implement without any complications.

The bundle size also decreased with the Ivy launch, and it is the first available in the Angular version 8 with Angular Ivy opt-in.

The existing rendering engine, Ivy, is used everywhere and has been improved and optimized in recent times. Overall, it authorizes the modernization of the Angular Package Format (APF), minor use of the compatibility compiler ngcc, and simplification of the component API. Hire mobile app developer to utilize the latest version and incorporate components of Ivy.

Ivy is an entire rewrite of Angular's rendering engine, which is the fourth and third since Angular 2. But unlike rewrites two and three, Ivy promises huge improvements to your application. With Ivy, you can compile components more independently of each other.

It will improve development times since recompiling an application will only involve compiling the changed components.

The Ivy engine is the key spot for Anguars’ next version, 9. Angular Ivy modifies how things work internally without changing the applications.

The most advanced renderer comes with the following features:

A lot of us forget that HTML will never touch the browser. HTML will be compiled by Angular into JavaScript instructions to develop the right DOM when the component appears on the page. It will then update the component when the state changes. So, the huge part of Angular is its compiler which takes all your HTML and makes the necessary JS code.

This compiler and the runtime have been entirely rewritten over the last year, and this is all about Ivy. Angular is a great framework that gains the same that is done by HTML with Ivy as a complete rewrite of the compiler to:

Now the "Why" for IVY has 2 main answers:

Locality here means a principle that Ivy follows. The idea behind this principle is to compile one file at a time.

And it was here, emphasizing "only one" because only one means just one component file and its template and no other dependencies, which will make the compilation process much faster and simpler. Earlier, it was impossible to balance code to ship to the AoT compiler, but now it will create a balance between AoT and JiT.

The Tree Shaking technique of Ivy is used to create optimization that assures that the ineffective code is not included in the final bundle during the application's build process. Therefore, developers don't have to send the whole framework code. It can be done with the functionalities used in app development. The main benefit of Tree shaking for optimization is reducing startup time.

Upgrading to Angular 9 with Ivy

Upgrading to Ivy for version Angular 9

To begin with, establish Angular CLI v9. In your terminal, run the command below.

Relying on your system, developers may have to run this command operating sudo.

Before elevating the app to Angular 9, you must boost it to the advanced Angular 8 version. To do this, open the terminal in the base directory of the Tic-Tac-Toe app and run the update command as follows.

Before restarting, you will have to install any altered package dependencies and commit the modifications to git.

Now you can revise to Angular 9 by running ng update again with different arguments.

This can take a few minutes to finish. Then you are required to install any modified package dependencies again and save and commit all to git.

Now, boost the Angular Material libraries to their latest version.

Add --a force to the above code to work around this.

Features of IVY in Angular 8

entryComponents commands are depreciated as they are no longer needed. Any Ivy feature can be lazy-loaded, and it can be dynamically rendered. It shows without routing or Angular modules, developers can now easily load and render a component.

Yet, mobile app development companies have to use component render modules to link a component’s template to its declarable dependencies in practice. Here, the libraries only used by a lazy-loaded component are wrapped in lazy-loaded chunks.

For globalization, locales consist of data formatting, number formatting, and similar regional settings that can be dynamically loaded at runtime. It directly loads to runtime and is not registered at compile time.

When JIT compilation was utilized in phases and only AOT compilation in the final build, bugs were caught when doing production builds or at runtime. With an angular mobile app development company, you can add AOT Compilation along with other features of Ivy to incorporate into your application.

Ivy can help smaller bundles due to its implementation of the Ivy Instruction Set, tree-shakable runtime rendering instructions. This is great for use cases in Angular elements, micro frontends, and web apps where Angular itself does not hold the entire document.

Regardless of the difference in the bundle sizes between View Engine and Ivy, bundle sizes vary based on the size of the application and the 3rd party library used by the web app development company.

It represents a large combined bundle size is reduced for great applications, which could mean an overall increase in size for medium-sized applications. The primary bundle's size will likely grow in both cases, which is not good for the initial page load time.

Concluding: Future of Angular with Ivy

Ivy entirely takes over the compiler and delivers a more robust core structure in Angular 10 and Angular 11 versions. The release of Angular 9 shows focused on the IVY and toolchain and made angular a simpler platform for building different apps with performance enhancements.

Ivy is an essential stone in Angular history that changes how the framework internally works without changing Angular web app development. In addition to that, it forms the ground for Angular Elements to evolve general in our Angular applications.